The Most Popular Ride Hailing Apps in the UK

Are you ready to take a deep dive into the UK’s current brand awareness for ride-hailing apps? It's gonna be a wild ride!

Just a decade ago, none of us had ever heard of ride-hailing apps. Over the course of just a few years, things have drastically changed as many have revved into the mainstream. Now, a lot of consumers would rather call a ride on their smartphones than hail a cab. An improvement in brand awareness, wouldn't you say?

Ride-hailing businesses know just how much their popularity has jumped recently and how well they are currently doing. It’s a very easy industry to track as you can learn a lot just by taking a look at a firm’s revenue. Even the general public can find out how well various ride-hailing apps are doing as there is a lot of data and information available online.

There’s only so much you can learn from looking at industry data, though. Focusing on it and nothing else might not be enough to help take the firm up a gear. Companies also need to know how their brand awareness and health is doing.

Industry figures might not give you any insights on brand awareness, but that’s OK because can help you find out everything you need to. This article is a great place to start. We’ve looked at ride-hailing apps in the UK to see how aware the general population is of each brand. We’ve broken up the results into different demographics (top 3 cities, other cities, and rural) to give you a deeper look into the UK’s current awareness of ride-hailing apps.

First of all, we surveyed participants from the top 3 UK cities: London, Glasgow, and Birmingham. We provided a list of ride-hailing brands and asked which ones they’d heard of.

Uber came out top with 91% of respondents (out of 1,050 respondents) having previously heard of them. 32% claimed to have heard of Addison Lee, which was followed by 18% for Gett. MyTaxi came in just behind with 14% while both Grab and Bolt / Taxify were known by 6% of participants. The bottom two were Ola and Blacklane with 4% and 3% respectively. 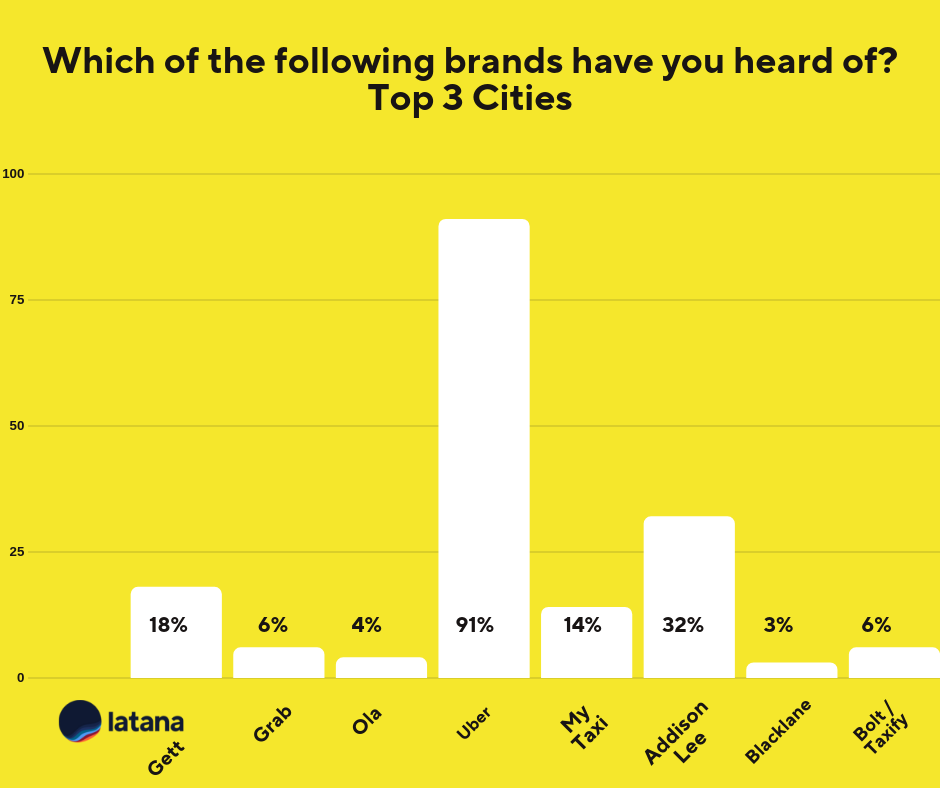 So far, Uber is speeding ahead of the others.

Brand Awareness: All Other Cities

The breakdown was fairly similar when we looked at the answers from respondents from in cities (all UK cities excluding the top 3). Uber came in top again as 91% of respondents had heard of it before. MyTaxi took second place this time with 13%. Addison Lee didn’t seem to be quite so popular as only 11% of those surveyed had previously heard of the brand. Next up was Gett with 7%, followed at 6% by Bolt / Taxify and Grab. Ola came in with 4% while only 3% had heard of Blacklane. 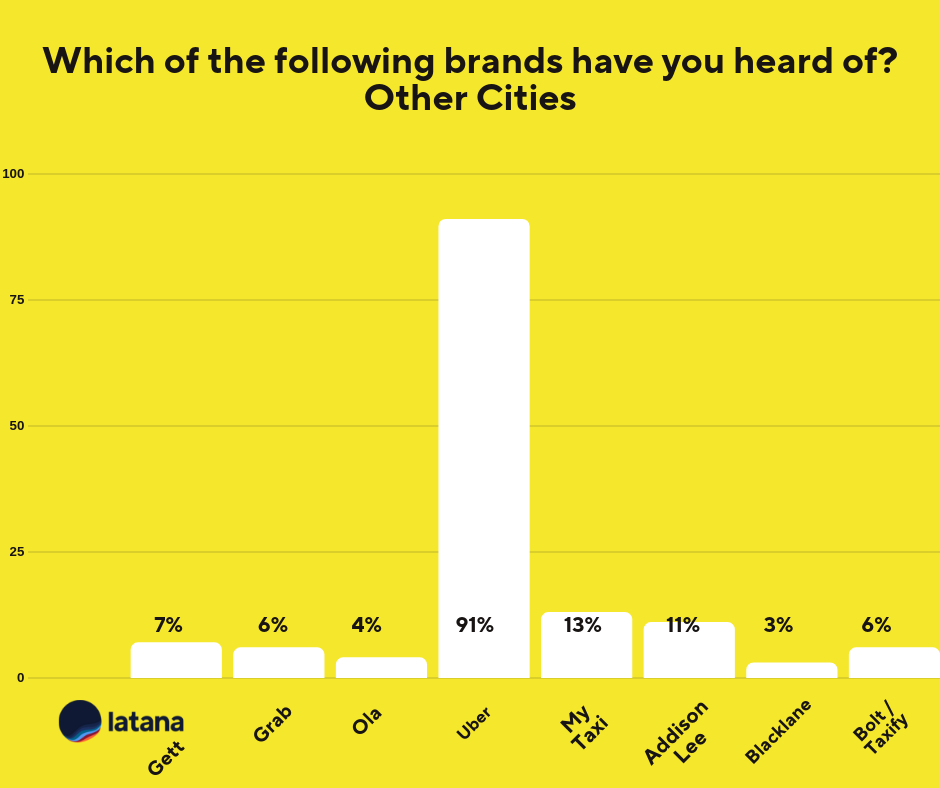 Uber was still top of the group and there was little change between the other brands apart from Gett (-11%) and Addison Lee (-21%).

A similar pattern features in the results for rural areas of the UK (any part of the country that isn’t considered a city). Once again, 91% had heard of Uber, which was followed by 13% of respondents having heard of Addison Lee. MyTaxi came third with 8% while Gett was in fourth position as 7% of those surveyed had heard of the brand. Around 6% of those living in rural areas had heard of Gett, and 4% had heard of Ola and Bolt / Taxify. Finally, Blacklane came in last place as only 3% had heard of it before. 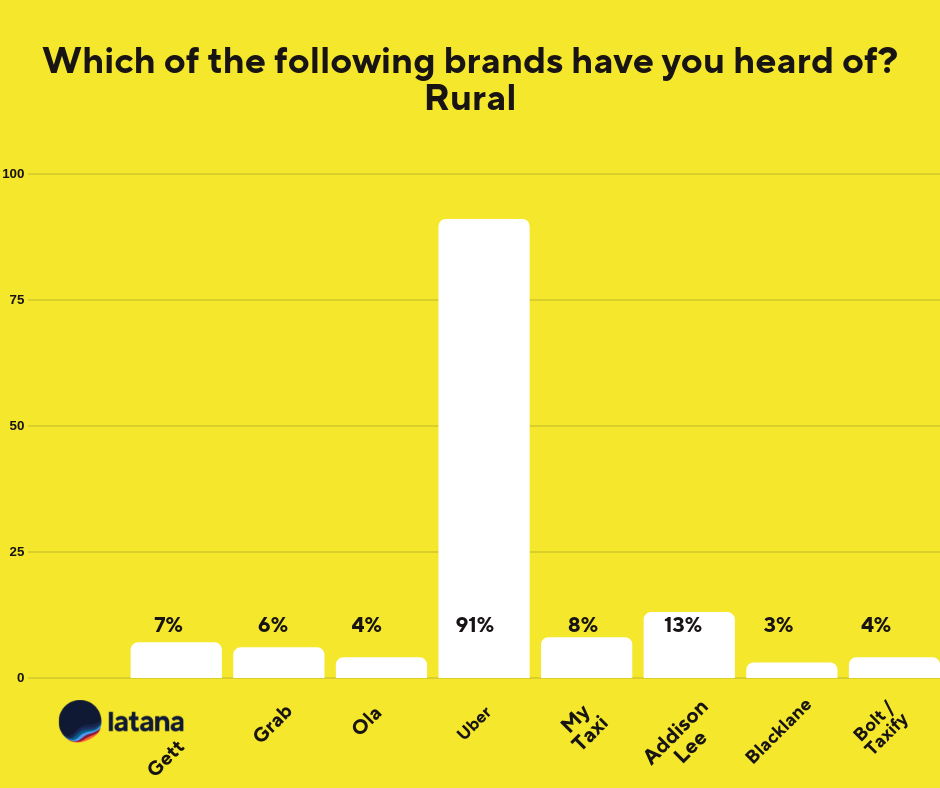 Even in rural locations, Uber still seems to have strong brand awareness. The only changes to the other brands were minimal with Addison Lee (+2%), MyTaxi (-5%), and Bolt / Taxify (-2%).

It’s obvious that Uber is well-known around the UK, but let’s see the kind of impact other factors have on their brand awareness.

The first thing to point out is that age has very little influence. In fact, awareness only drops 1% between younger generations and 56-65-year-olds. Similarly, gender, income level, and whether an individual is a frequent traveller or not don’t have any discernible effect.

On the face of it, Uber seems to appeal to a very wide target audience. Their marketing is certainly trying to target as many people as possible. But would all of these people really consider using the app? 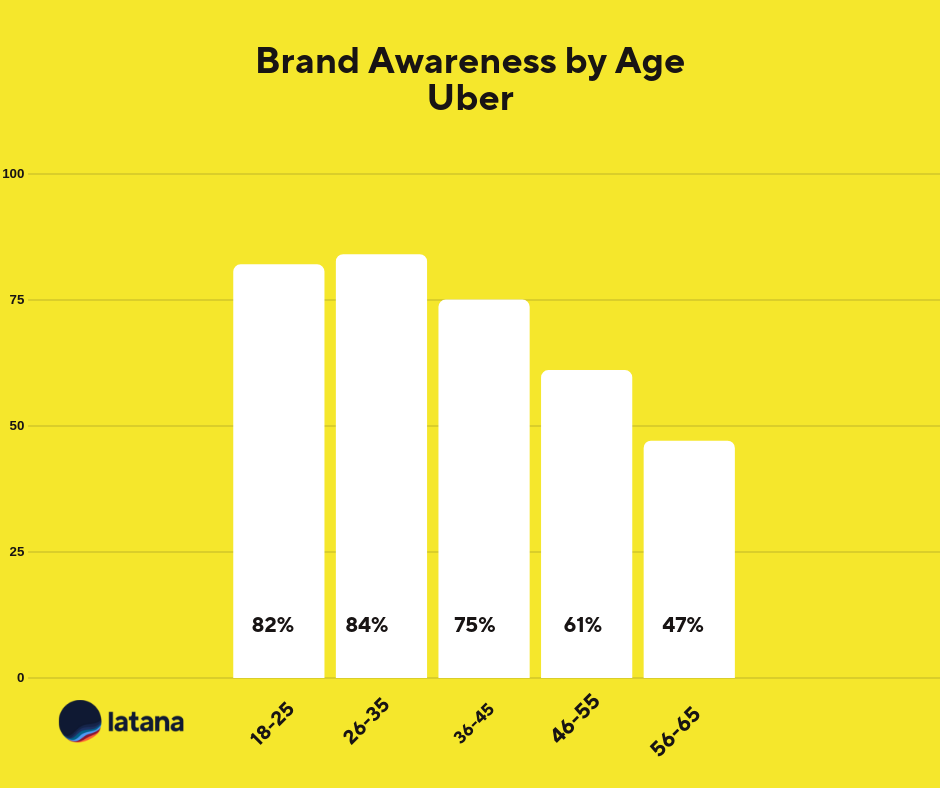 So, it looks like people are a lot more likely to use Uber the younger they are. When you compare the younger and older age brackets, there’s a very noticeable and significant drop-off.

From our results, it looks like Uber is the most popular with those who are aged between 26 and 35, so let’s take a deep dive into that age bracket.

Out of this range, it seems that an individual’s income level doesn’t particularly influence their use of Uber. 83% of those who have a low income use it, while 90% of those on a higher income also would. Even though there is a difference between the two, it is only very slight. 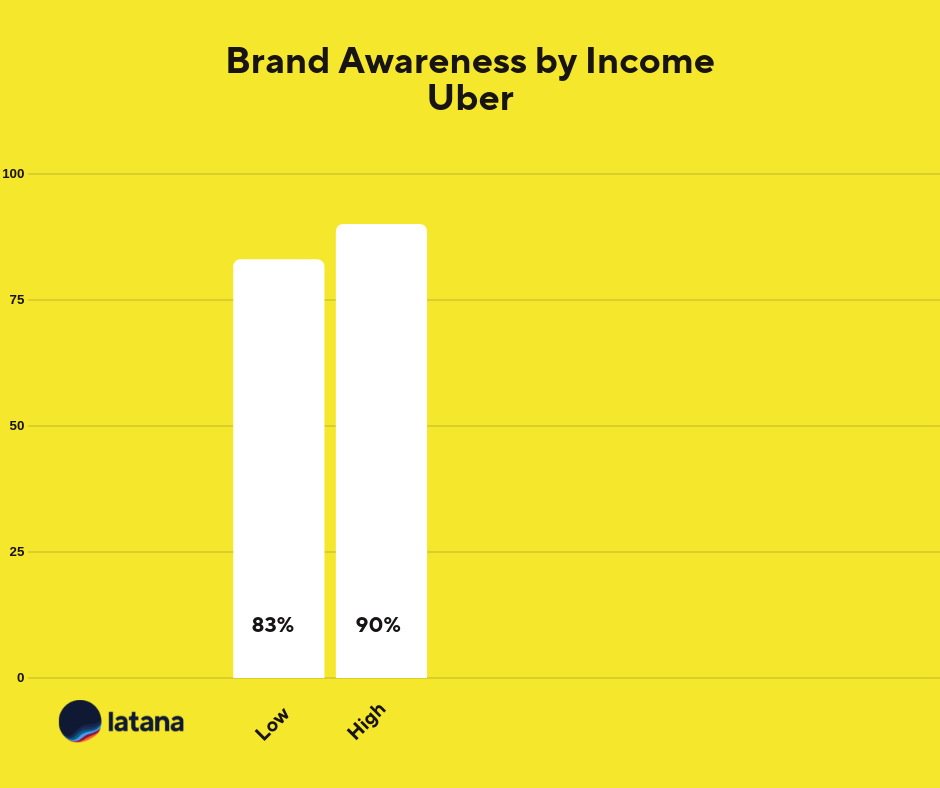 We also couldn’t see any difference when we looked at the difference between frequent travellers and the “normal” audience within this age range. Out of both these demographics, 84% stated that they would consider using Uber. So, it seems that age is really the only differing demographic for Uber.

What Can We Take From This?

The main takeaway from these survey findings is that Uber is overwhelmingly the most well-known ride-hail app in all locations in the UK.

When it comes to Uber’s brand awareness, there are no factors that drastically alter it. In terms of audience age, gender, and frequency of travel, there are no changes for the brand’s awareness with 26-35-year-olds. There was a slight change when looking at level income, although a very minor one.

If there’s one thing we can take from the results of this survey, it’s that the Uber brand performs exceptionally well with the 26-35-year-old age group. That’s a testimony to its marketing department!

Its competitors should gather some tips on increasing brand awareness!

See how others are building their brands, and get the details you need to follow in their footsteps.