How Meditation Apps Rank for Health and Happiness in DACH

How well do people in the DACH region associate mindfulness and meditation apps in the area of health and happiness? Let's find out!

Are you feeling zen? If not, there’s an app that can help!

We all lead such hectic lives these days, both in and out of the office, so there’s no wonder that more and more people are now taking up meditation as a means to relax and unwind. Due to this increased awareness and the current boom in popularity for meditation in the media and across social media, the companies that create these apps are now enjoying a new demand for their products.

But is that the same in all regions across the world?

It certainly appears to be the case on the surface. In 2019 we saw a particular explosion of popularity with Calm becoming the first unicorn company in the mental health category. Across the board, we also saw a lot of new meditation app businesses started to pop up, like German mindfulness app 7mind, and a few of the big household-name brands started branching out too.

We became curious and wanted to know more, especially about how meditation and mindfulness apps are viewed by people in the DACH region (Germany, Austria, Switzerland). Are they seen as bringing the health and happiness that they originally promised?

Unfortunately, we need to kick this article off with some bad news. Mindfulness apps don’t seem to be resonating with customers in the DACH region in terms of health and happiness quite as well as one would imagine — that’s when they are faced with unaided brand awareness questions anyway.

We asked which brands came to mind when they thought of health and happiness. Take a look at the results.

Out of 1017 respondents, Austrians listed the following as their top 3 brands. 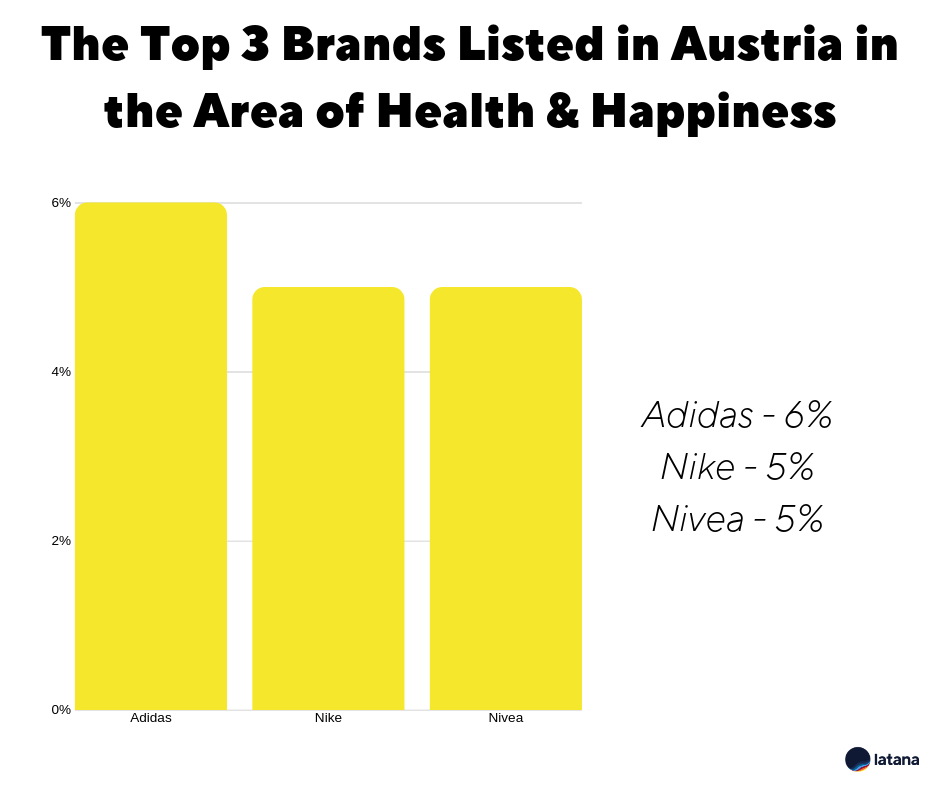 Out of 1027 respondents, Swiss respondents listed the following as their top 3 brands. 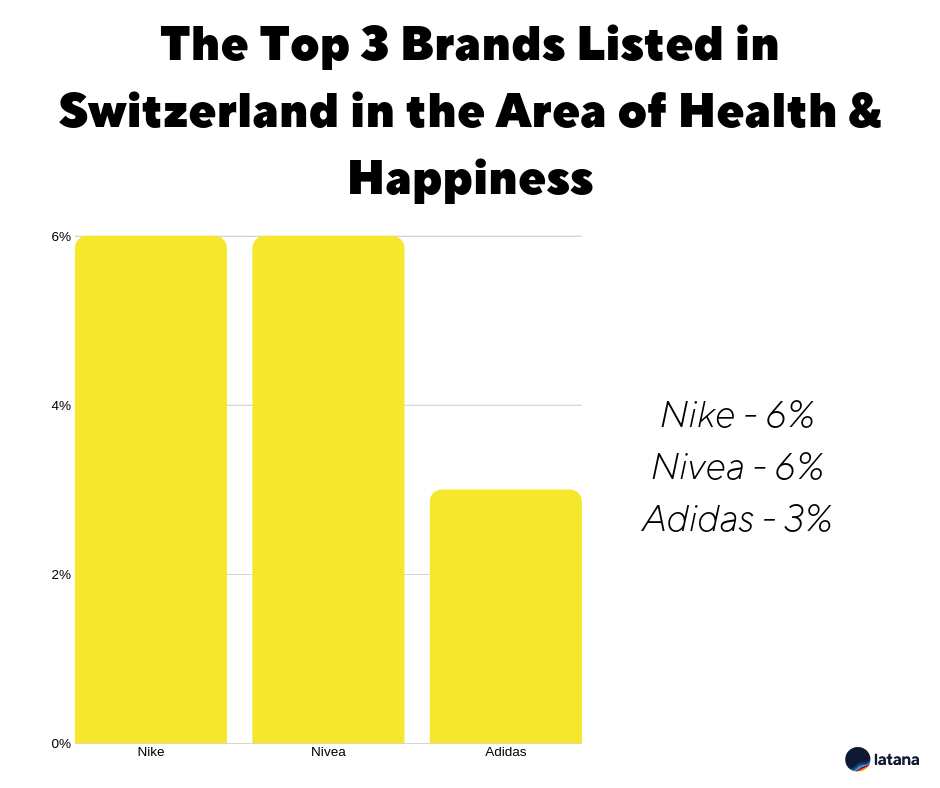 Out of 1032 respondents, Germans respondents listed the following as their top 3 brands. 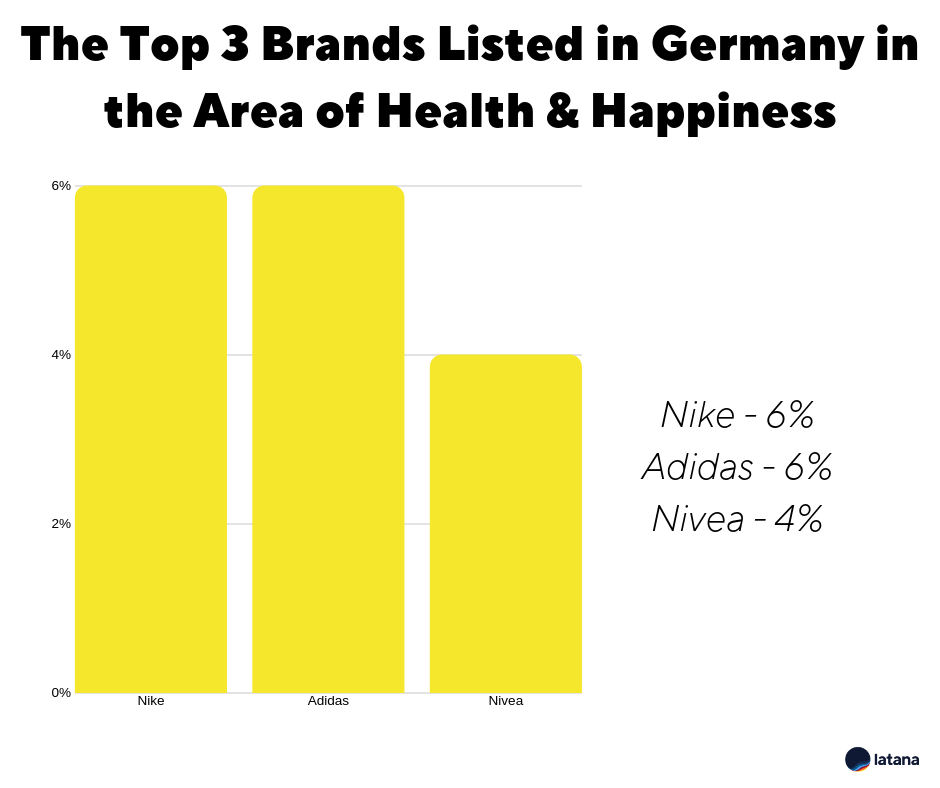 That might not be what meditation app brand managers want to hear, but it’s not alarming that some of the biggest household brand names took the top 3 spots.

What is surprising, though, is that mindfulness apps barely hit the 1% mark.

When given a question that featured a list of mindfulness apps, things didn’t look any more promising. When asked which ones they had heard of, most people answered with none. 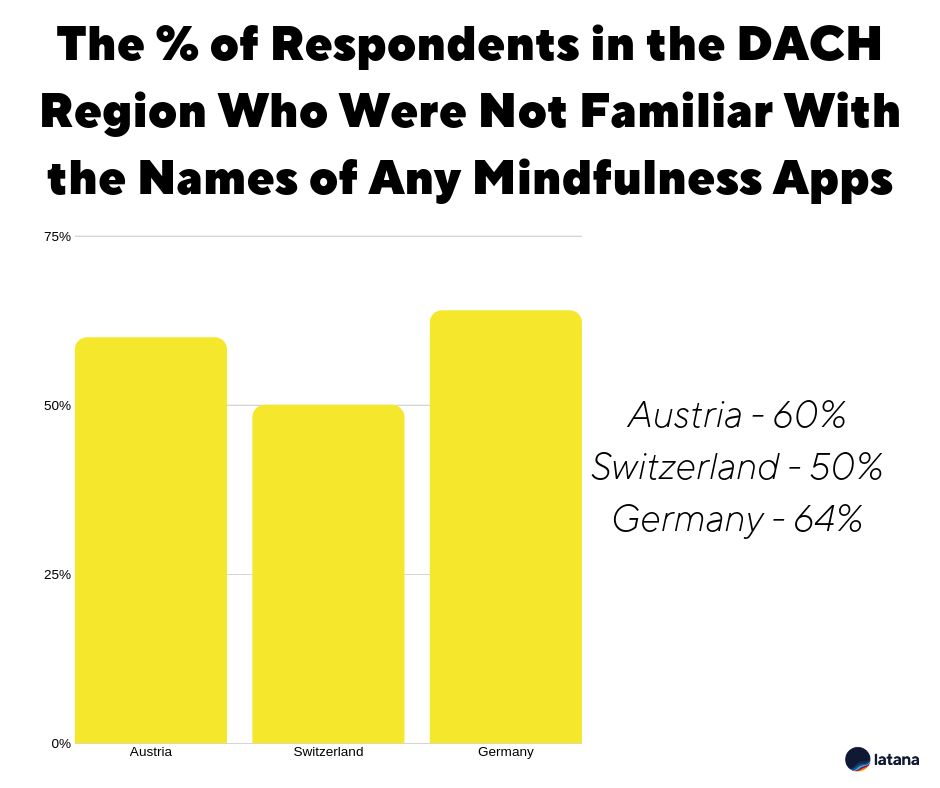 What Do People Associate with Mindfulness Apps?

It can be hard to understand why so many who were asked had never heard of mindfulness apps before. After all, most people had listed personal health as a top-3 interest. 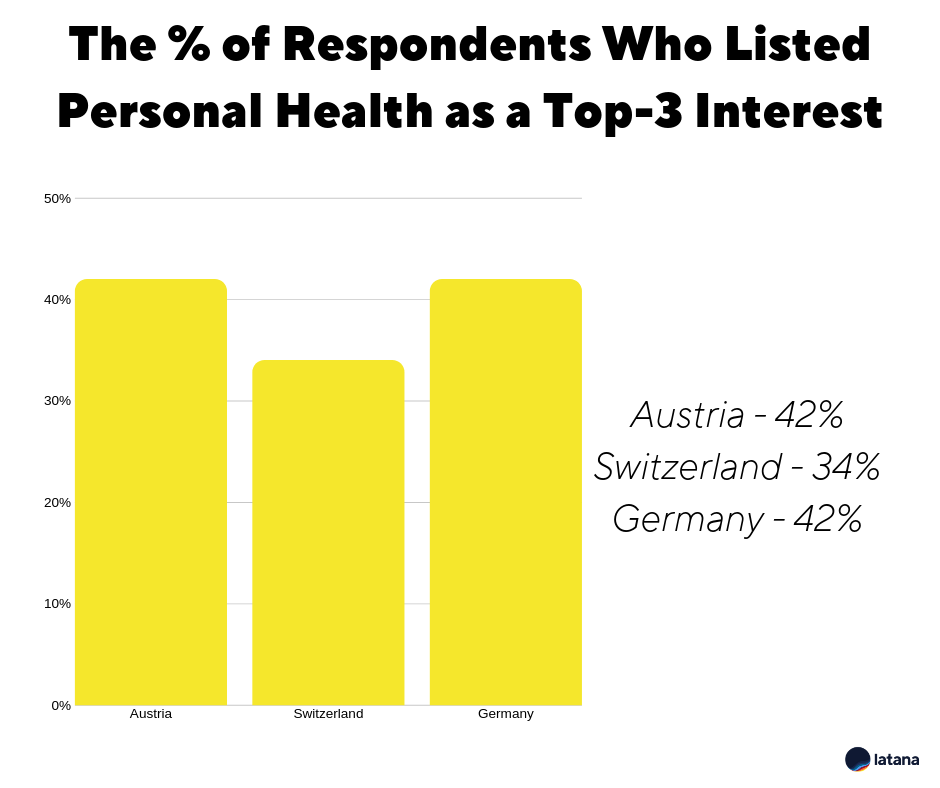 Two-thirds of the brands listed in the aided question were sports brands, and quite a large chunk of people stated that they do actually use fitness and health apps. 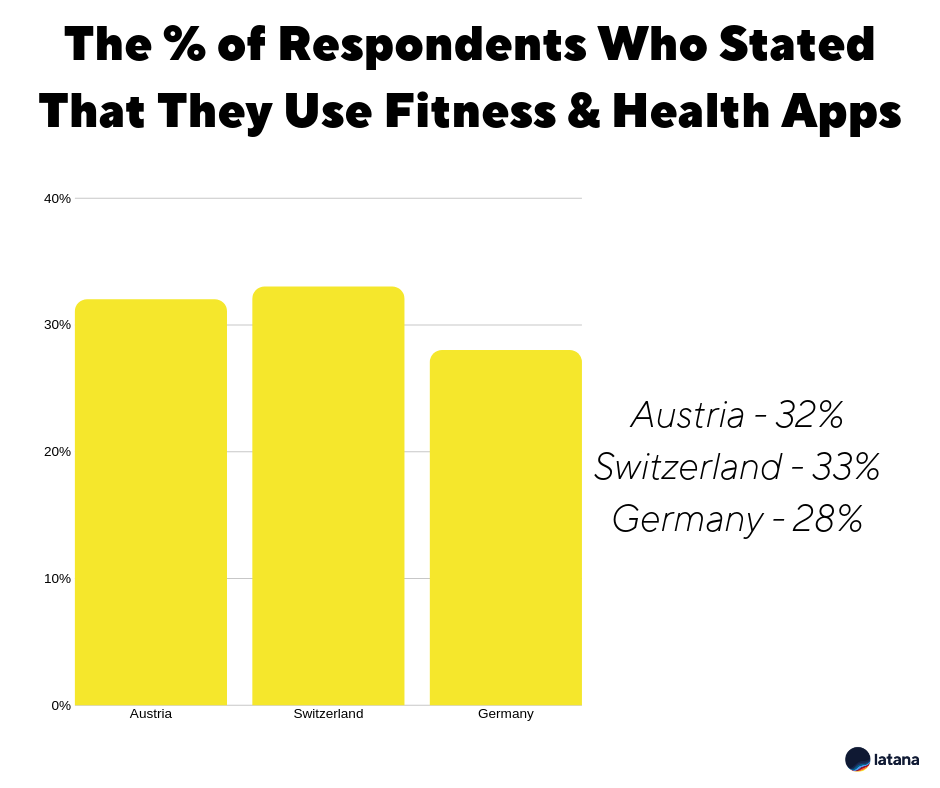 Is Mindfulness Associated with Health?

One thing we can assume based on our research is that mindfulness and meditation are not associated with health.

It’s not just health, though. Most of the respondents didn’t seem to associate mindfulness with happiness either. They were posed the question “Which of the following are your main goals in life?” Being happy and having fun came top in two regions: AT (59%) and CH (51%) while it was second in DE (53%). 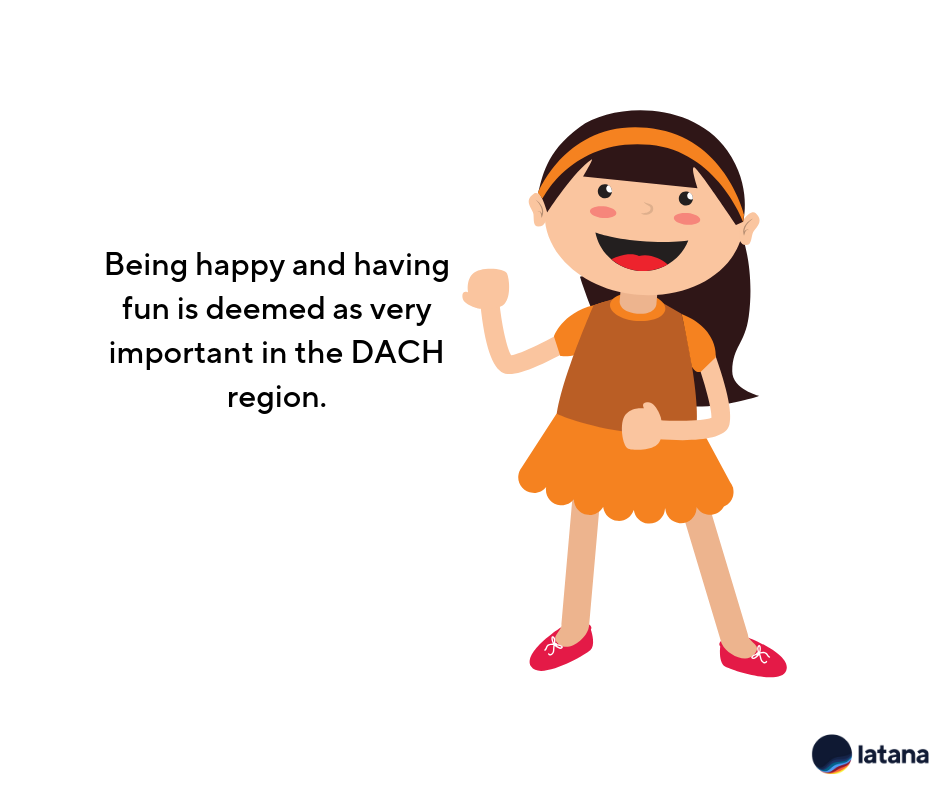 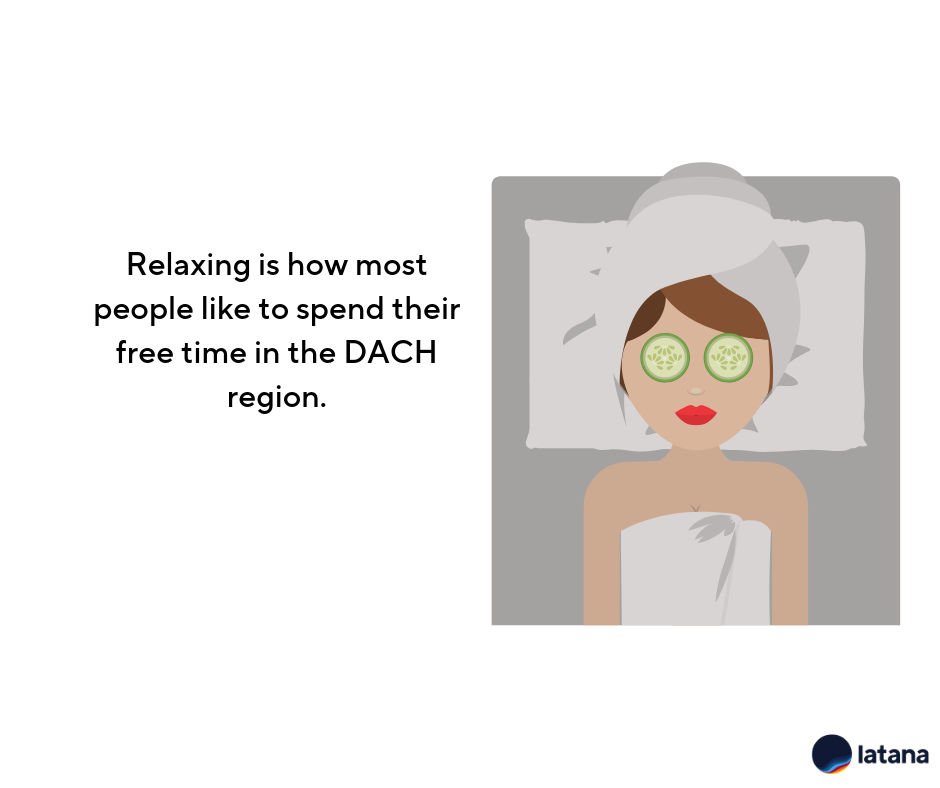 We didn’t ask respondents specifically if meditation is considered a form of health and happiness but looking at the results, respondents don’t seem to make an association between the two. They didn’t list any such apps in the unaided brand awareness question and they didn’t indicate knowledge of any brands when presented with a list of mindfulness apps. However, they have indicated strong interest in personal health, being happy, and relaxing.

We decided to take things further with this research.

Our respondents were asked whether they were interested in mindfulness and meditation. It’s fair to say the results weren’t that encouraging. 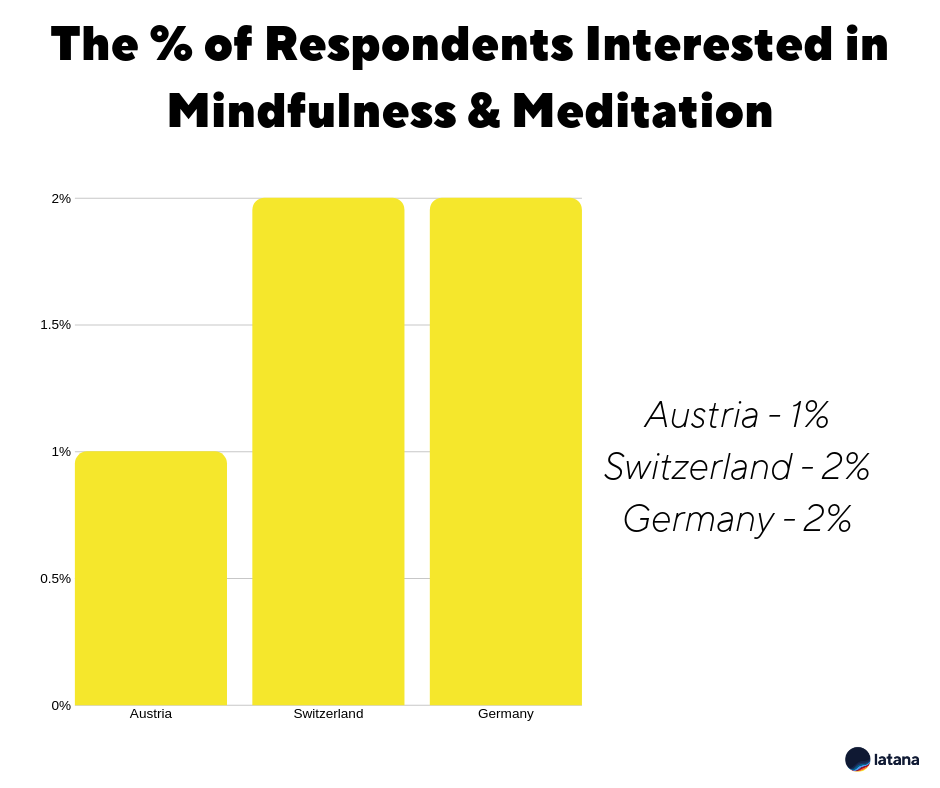 Something else that stood out to us was the fact that most respondents considered themselves to be moderately to very stressed. Curious, no? 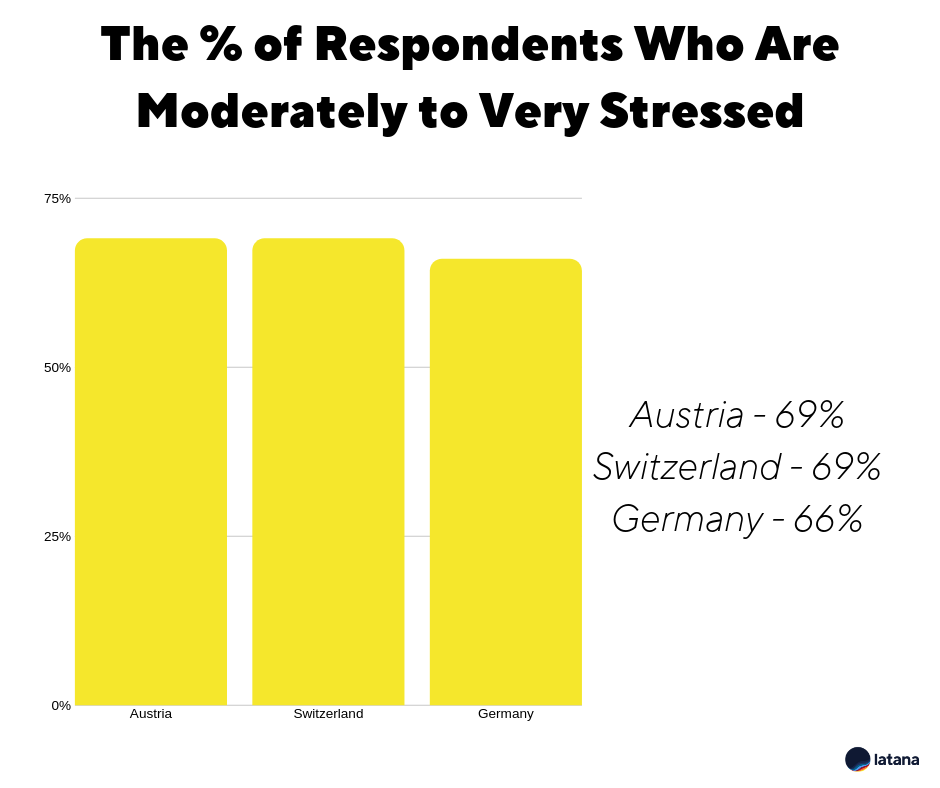 So, it looks like there is a lot of work for brand managers of meditation and mindfulness apps in the DACH region. From all the data gathered by the study, it appears that the key is showing just how positive these apps can be when it comes to health and happiness. If the right kind of marketing campaign is established, then this shouldn’t be too difficult!

The results shown in this post are from a survey conducted by Latana during March 2019 across the internet connected population in the DACH. The total sample size is n=3076 and a Multilevel Regression Poststratification (MRP) model was used to obtain representative results.

See how others are building their brands, and get the details you need to follow in their footsteps.